Public support for mitigating extreme weather impacts on natural systems depends on their perception of risks posed. As “natural” disasters, extreme weather may be seen as irrelevant to the preservation of natural resources. Yet, few natural systems remain unaltered by human activity or development, which may undermine their resiliency or recovery in the face of otherwise-normal weather extremes. Greater public understanding of this shifted balance can grow conservation awareness.

Our lab has collaborated with researchers at OU’s Center for Risk and Crisis Management to survey Oklahomans about their views on extreme weather impacts on wildlife. We did so by incorporating five questions into the Oklahoma Meso-Scale Integrated Sociogeographic Network (M-SISNet), an NSF-funded georeferenced panel survey of randomly-selected residents that has been ran quarterly for the past 3.5 years. These questions can generally be summed up as asking people about their personal opinion regarding:

We’ve found many insights in the data, including some strong evidence for preconception bias but also openings for educational outreach. Dr. Ross was fortunate enough to be accepted to present these initial findings at the SESYNC Boundary Spanning 2018 Symposium in Annapolis, MD, where socio-ecological systems scientists from around the world shared similar interdisciplinary research.

One particularly interesting discovery we made in the data, was an apparent disconnect between people’s’ attitude toward the preservation of natural resources and their concern about the damages inflicted on natural systems by extreme weather. As you can see in the heatmap of responses, there were many people who expressed much more concern (scored on scale of 0-10) about the former than the latter. We see this as indicating an opportunity space (outlined in green), wherein people would be likely to increase their level of concern about the ecological impacts of severe weather if they were better able to link this to the degradation of Oklahoma’s natural resources. 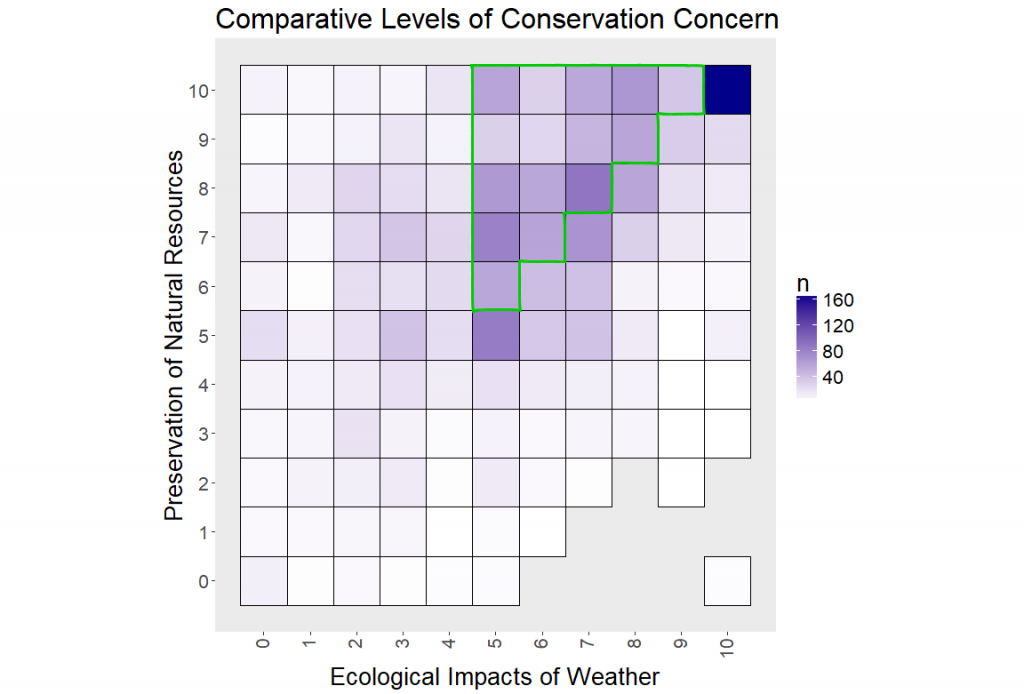