Hurricane Irma as a force of extinction

Early September 2017 brought forth a hurricane of epic scope in the Atlantic basin. Irma shattered many records for duration, intensity, size, and overall destructive force. As it scoured through the Windward Islands of the Lesser Antilles to its landfall in south Florida, Irma caused catastrophic damage to not only human lives and infrastructure but also to the unique ecological communities on many Caribbean islands.

The impacts of Irma varied among islands. Barbuda suffered the first and, perhaps, most devastating blow. Other islands at increasing distances from the eyewall suffered less and less damage.

As the degree of damage was spread to varying degrees across the Lesser and Greater Antilles and eventually to the continental USA, a tragic opportunity emerged to examine this event in light of MacArthur and Wilson’s (1963) theory of Island Biogeography. Under that theory, ecological dynamics across island archipelagos are rooted on bouts of local extinctions to be replenished by recolonizations. The destructive forces of Hurricane Irma could have initiated the next stage of this natural experiment by completely wiping out certain populations, or at least dramatically reducing them. 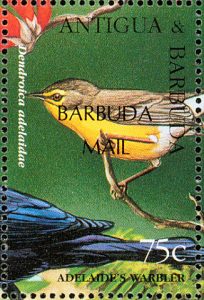 One striking example is the case of the Barbuda Warbler (Setophaga subita), found only on its namesake island and thus labeled an ‘endemic’ species. Though it was originally treated as a subspecies of the Adelaide’s warbler (Setophaga adelaidae), in 2012 it was restored to Riley’s original 1904 description as a full species (see specimen picture below).

Was this species subsequently doomed by 2017’s Hurricane Irma? Pictures and videos of the island showed widespread defoliation of the shrubby vegetation upon which the warbler relies. Even though individuals of this species have thankfully survived, they may face an uncertain future if habitat recovery is simply too slow or if their numbers now expose them to greater small-population risks such as inbreeding. Since endemic species are by definition irreplaceable (they aren’t found anywhere else), they are often the focus of conservation concern.

Yet, the decline of the Barbuda Warbler might not be the only evolutionary and ecological consequence to emerge from Irma. The fundamental basis for evolution through natural selection is the variation found within a species. In the context of Island Biogeography this points to the importance of so-called locally adapted populations. These are assemblages of the same species that occupy very different habitats that each have their own suite of characteristics that are best suited to their local conditions.

For Caribbean island species which may occupy very different types of islands, this means that individuals from one locally-adapted population would fare poorer if they left their home island to try to establish themselves on neighboring islands. If Irma extinguished these locally-adapted populations – perhaps those even elevated to subspecies status – the capacity of the species to recolonize the affected island may be diminished or even unlikely.

Consequences for the individual species can be dire, however the disruption can extend to the entire biological community. Depending upon the replacability of the lost species and its ecological function, local extinctions can fundamentally shift food webs, competitive relationships, and the prospects of resiliency and recovery in the face of future disturbances. Provided the severity and scale of Irma, that singular event in history may continue to entirely reshape ecological processes for years to come.

As a hyperkeystone species, humans are dependent upon the stability and reliability of ecosystems to provide the resources and services central to a functional society. We should, therefore, be ever vigilant of events such as Irma that hold the potential to forever reshape both the biotic (species and biological communities) and abiotic (water chemistry and atmospheric patterns). The very real possibility of carbon emission-driven shifts in the intensity, timing, duration, scale, and frequency of extreme climatic events such as hurricanes should give us pause regarding the consequences of inaction.

Extinction-level events need not be fire and brimstone – and they rarely are so. They generally march slowly forward like any evolutionary force, pruning the tree in favor of the better adapted. Yet, this must be a process balanced by the emergence of variation lest we lose the functional health of natural systems. What had likely been one-in-a-million year events, such as widespread local extinctions from a single hurricane, would obviously have profound impacts if they even arise once every thousand years let alone every decade. We stand to lose not just an isolated songbird most people have never heard of, but potentially the vibrancy of entire ecosystems that provide the Caribbean its inherent allure.